Designing a solution to idle merchandise at Mercado Libre

A total of US$10 million was idle merchandise at Mercado Libre because partial withdrawals weren't systematic based on products' condition.

Maximize the amount of money that can be recovered by withdrawing products in the best condition and taking them to the most appropriate location (liquidation or return to vendor). 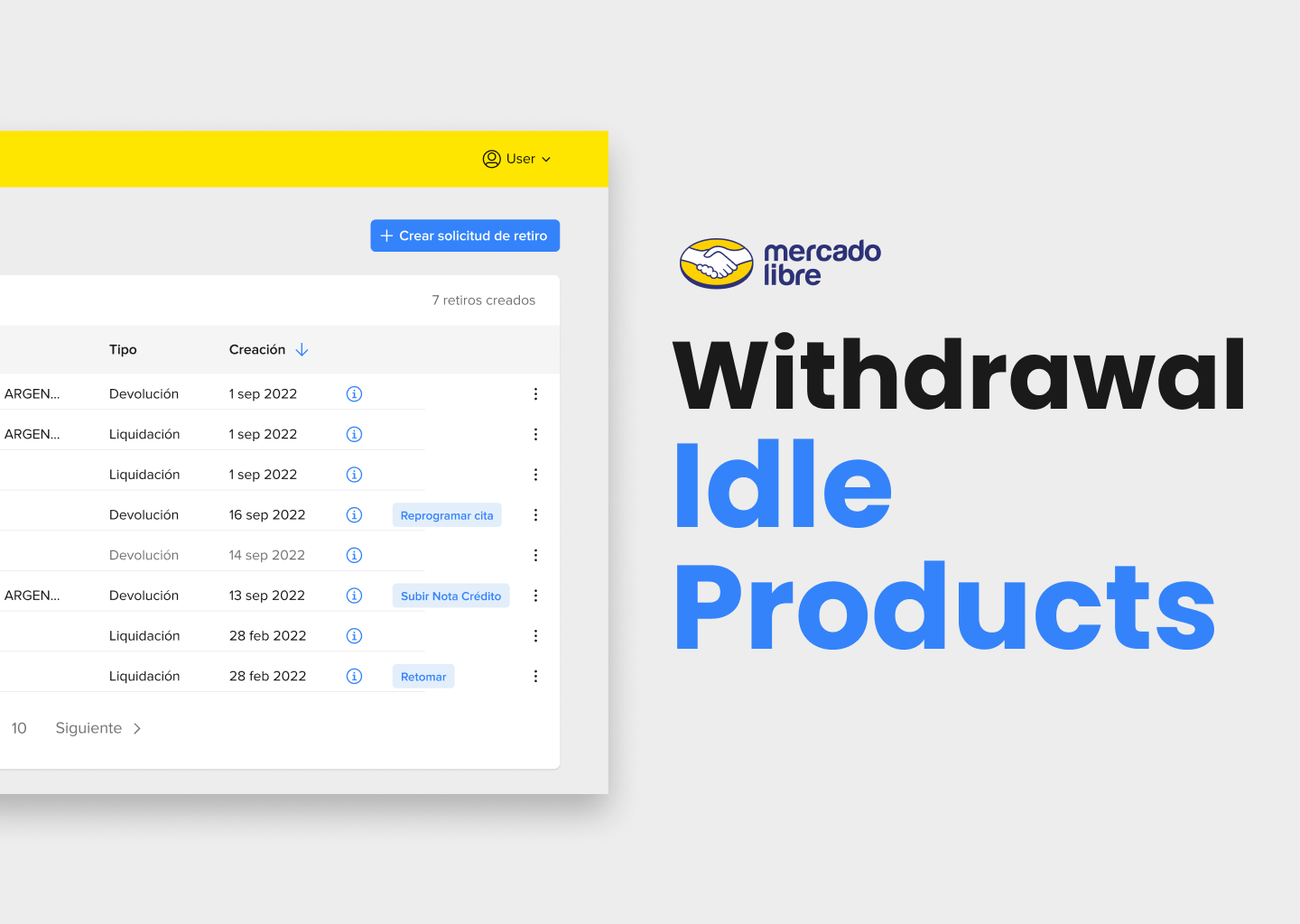 Since Mercado Libre is not synchronized with the warehouse management system and SAP, products are withdrawn manually (with an XLS file) from the fulfillment centers, making it not scalable, time-consuming and prone to outdated information. 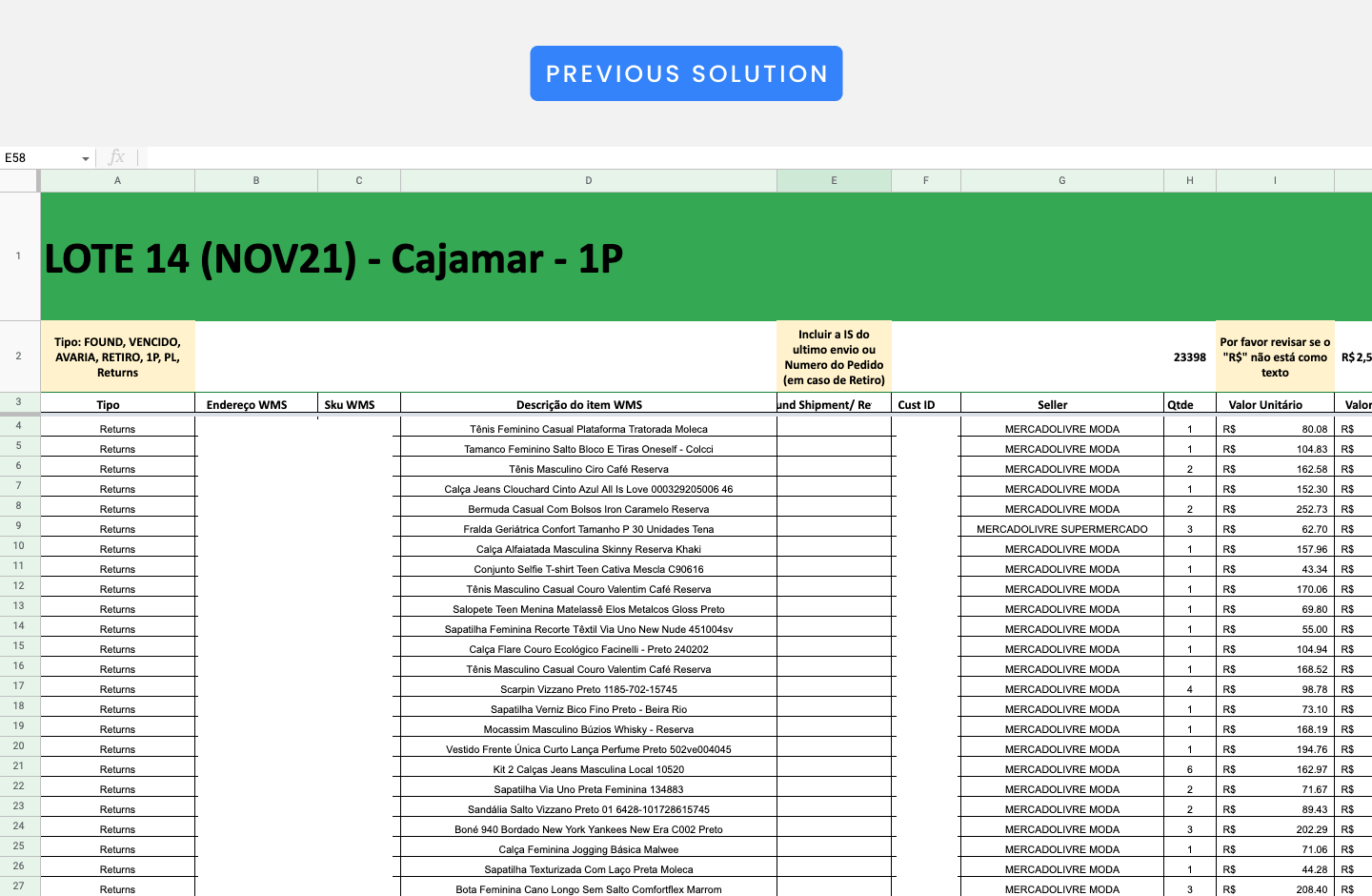 A few stakeholders were interviewed to find out how they currently make withdrawals. By doing so, we created a map of the actors and processes involved in the fulfillment center, such as invoicing, accounting, and logistics.

⚠️ Research finding ⚠️ Initially, it was unclear how the end-to-end process worked, who was involved, and what considerations were involved. To understand as much as possible, we had several meetings with different stakeholders from different teams.

Our stakeholder interviews revealed that the process was highly manual. All actions were done outside of any system except for the request for product recalls, which was created through a Jira ticket. From the results of the interviews, we created a service blueprint with the actions that occurred in each channel.

IT Limitation Mercado Libre's marketplace had a technical limitation, so we had to repurpose a solution that was created for 3P (third-party) sellers.

The first explorations took place before the stakeholder interviews. In these explorations, we hypothesized that the user could choose the products to be withdrawn, one at a time, and then select the quantities.

Since the user showed us the files they use to analyze the products to withdraw, we realized there were thousands of products and hundreds of units, so the first idea could not scale. 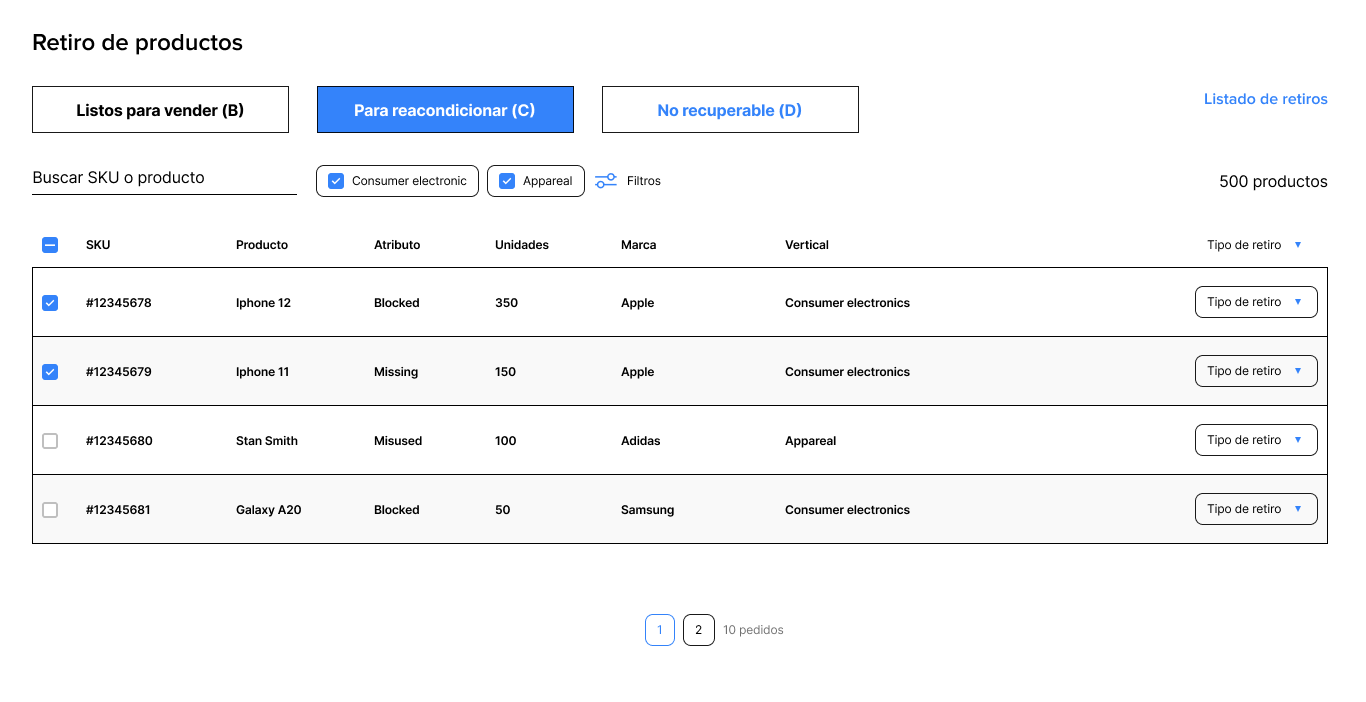 We struggled to find a solution that would scale, and I realized we were already using excel files to upload information in bulk to other portals. In order to speed up the process and make it easier for the user, the file should require as little information as possible. Due to this, we decided to have two different files, one for each withdrawal type.

As part of the withdrawal process, we needed to provide additional data for the SAP invoicing and matching processes, as well as our WMS.

Ideally, the final experience should simplify the current manual process and be scalable across all countries (including invoicing and accounting). Four critical moments are taken into account in the final flow:

The business team knew they had approximately $10 million worth of product sitting in the fulfillment center, but they didn't know exactly what the process was for withdrawing products. Immediately, together with the product team, we started devising screens to select the products that needed to be withdrawn. It seemed like the most logical way to do it, but we didn't take into account the times that were already used in the process:

How the project affected the users and the business

The tool enables users to request product withdraw, automating some manual processes (invoice creation, withdraw requests to the fulfillment center product by product, and reconciliation between SAP and WMS).

There are approximately 3 withdrawals per month and more than 10,000 units are disposed of in Brazil. With more types of withdrawals added to the process, the amount may increase to US$2.5 million.